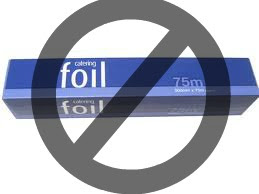 This was not planned.  But this is a follow up to the post I did last week, No More Foil!

Last night I was making barbecued pork chops for supper and thought baked potatoes would be great along side them.  With my plan to not buy tin foil anymore, I was stumped at how to go about it.  When I have food cooking in the oven, I just cook the potatoes in a covered casserole dish along with whatever else is cooking and they are usually done at the same time, but I didn't want to put a glass casserole dish in the barbecue.

This is what I came up with.  I washed and pricked the potatoes as usual. Then I microwaved them for about 6 or 7 mins to get them started cooking.  When I lit the barbecue, I put a cast iron skillet on the rack with the potatoes in it and covered it with a lid. (This is when I wish I had a cast iron dutch oven.) I closed the lid and let them cook while the BBQ warmed up and then they cooked another 20 mins while the pork chops cooked. They turned out great! Although, next time I might turn them once during cooking. 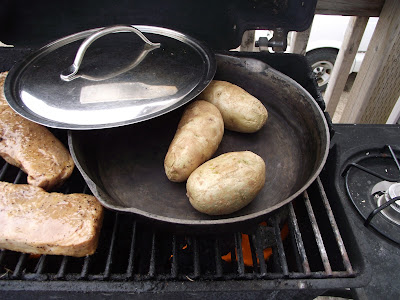 It's probably silly to see how long I can go without buying tin foil, but like I said in my last post, it's one less thing I have to buy from the store and I like that.

Posted by Crystal @ Country Mom at Home at 6:01 PM