This weekend we enjoyed watching The Central Alberta Homeschool Christmas Choir, directed by Debbie Zepick, which Rebekah was singing in.  They were performing in 3 different locations in central Alberta and were raising money for a boys orphanage in Mwanza, Tanzania. They were able to purchase 6 acres of land last year and should be able to build an orphanage this year.  All the boys and the couple in charge have been living in a rented house. If you would like to know more about Project Mwanza, click here.

The choir was accompanied by an orchestra.  They have been practicing since the beginning of September, for 2 hours a week and much more practicing this last week.

It was so beautiful and we were so proud of all the homeschoolers. Especially the little ones because that was a lot of standing and waiting for their parts.  There was 120 homeschool students in the choir and 30 more in the orchestra.


I was able to take a video of the choir singing, "Angels are Making Their Rounds" in Red Deer.  I was sitting too close and couldn't get the orchestra or all 120 choir members in the picture. Plus, my camera has not very good sound. But it will give all the grandparents an idea of what Rebekah has been up to.


Rebekah was sad it was over, but she only has to wait 9 months to begin practicing again!

We are having much fun this Christmas.  Here are some of the things we have enjoyed lately.
So now we have the Homeschool Choir performances ahead of us and the best day, Christmas!

Posted by Crystal @ Country Mom at Home at 10:49 AM No comments:

Today I am participating in Country God Girl's Wacky Wednesday link up. Thanks Rebekah for hosting! 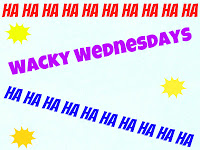 This morning, while doing school, I guess Ben got hungry.  He had Larry make him some toast. While he was eating his toast, I just reminded him that he still had to do math. His response to me was this;


"My stomach doesn't want to do math right now."

Now I think I've heard every excuse to not do school work!
Posted by Crystal @ Country Mom at Home at 10:17 AM 1 comment: