Yesterday Rebekah and I tried our second attempt at making homemade bagels, and guess what? They turned out! Not only did they turn out,but  I must say that they are the BEST bagels we've had in a long time. They are really easy to make, only a little longer than making buns because of the boiling step.

We made multi grain. I was inspired by Mennonite Girls Can Cook. I mentioned this was my second attempt. The first time, the bagels completely deflated after the boiling step. I cooked them anyway and they tasted very good. I realized what my mistake was while we were making them yesterday.  Again, the same with my bread dough, I let them rise way to much, so that they were not stable enough to keep their shape.

This time, I started boiling them right when they had only doubled in size.  But a cool thing happened as I plunged them into the simmering water, they grew a lot and they even had more oven spring in them while they were baking. 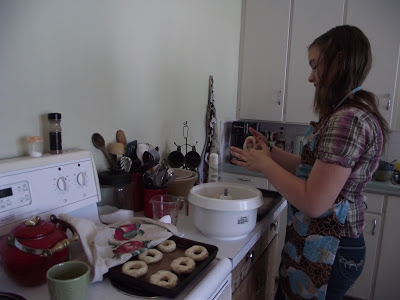 This is how we made them in our mixer;

1 c 7 grain cereal (multi grain) which has been soaking in boiled water for 7 mins and drained.

Mix together for 5 mins.  Start with 5 c of flour and add more as needed. This dough should be on the stiff, but workable side. I think we ended up adding 7 cups of flour altogether because the soaked cereal had more water in it than I thought.

Take about 1/3 - 1/2 cup of dough at a time and roll it into a ball. Poke your finger through the middle and form the bagel.  Place on greased cookie sheet and let rise until doubled in size.  This should make about 18-24 bagels.

Close to the end of the rising time, bring 3 inches of water to a boil with 1 Tbsp sugar in it, then keep simmering on medium heat.  Add 3 bagels at a time and cook 30 seconds on each side. I resprayed the cookie sheet with oil while I was boiling them. Then return bagels to cookie sheet.

When you have boiled a whole sheet of bagels, brush with beaten egg white and bake at 375 for 25-35 mins, depending on how big you made them.  We made ours very small and only had to bake them 25 mins. We got 35 bagels out of this recipe.

While that sheet is in baking, get the other bagels ready for the oven.

We have been enjoying this delicious treat and I can tell you, that I hope never to buy another bagel again. Rebekah said that she likes making bagels more than bread, so I think I will hold her to that.

This post is linked up to Raising Homemakers Growing Home Saving 4 Six A Wise Woman Builds Her Home The Charm of Home Our Simple Country Life Above Rubies Hope in Every Season A Mama's Story
Posted by Crystal @ Country Mom at Home at 3:14 PM 6 comments:

Well, we're not exactly desperate, but I can think of better things to spend $40 on right now rather than a haircut. The only thing is, I really, really needed a haircut. So, I finally got brave and let Rebekah cut my hair.  I had an idea months ago about putting tape across my back on my shirt as a guide and getting Rebekah to cut along it. That is what we did.
You can see in the picture below that my hair was getting very long and stringy. 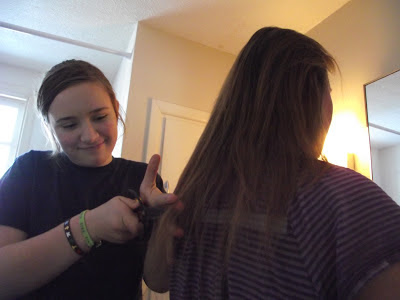 Once Rebekah was done I gave myself a few layers with the haircut I mentioned in this post to soften up the edges a bit.  It turned out pretty good.  I wanted more of a square back and that's what I got. The layered haircut I can give myself has a V shaped back to it.

You can kind of see the "new do" in the picture below. 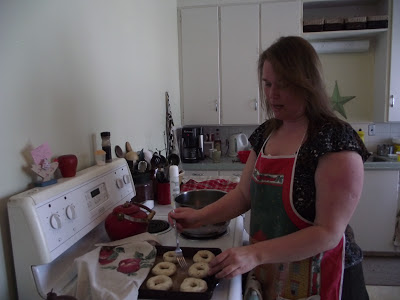 Thank you Rebekah! And yes, I am making bagels in that picture. But I will post about that later.
Posted by Crystal @ Country Mom at Home at 9:29 PM 2 comments:

Today we had the pleasure of watching our 2 violin students participate in a "Fiddler's Jamboree".  Rebekah and Jacob did an excellent job playing their song.  I didn't know what to expect, not being the the music circles before, but we thought that all the performers did really well.

My Frugal Week and Oatmeal Bread and Soup Recipe

I have noticed that a lot of you are blogging about your frugal accomplishments on your blogs and I love to read all your ideas. So I thought I would post more often about how I have been making our money go further.

This week I have been able to feed my family for less, thanks to a nice ham, milk on clearance and homemade bread.  I have had to pinch our dollars a little tighter than usual, so I thought I would start by cooking one of the picnic smoked hams I had in the freezer. They were on sale for $2.00/lb a while back and I bought 3 of them.

These are the meals we have enjoyed so far;

And I still have 3 little packages of ham put away for either ham and cheese omelets, or for pizza topping.  So this $15 ham will serve us 10 meals! I love it!

It is so easy to make ham broth. First I put the bone in a big pot and fill with water. Then I bring it to a boil and simmer for 3-4 hours. Then I let it cool enough to take the rest of the meat off the bone and strain the broth.  I like to put the broth in the fridge to chill because the fat will harden on the top to make it easy to take off.


My grandma made yellow bean soup every time we were able to visit her. I have always loved it and I am so happy to able to pass the recipe down to my children.  I think it is a Mennonite recipe.  This is how I make it. (Please let me know if I've done something wrong Mom)

Cook onion in margarine. Add the ham and cook 1 minute.  Cook potatoes if not cooked yet. I add the beans the last 4 minutes. I also use this vegetable water for the water in the recipe.
Add the veggies, ham broth, water and bring to a simmer.  Add milk, cream and spices. Heat and serve.

For the last 7 months or so I have been having an awful time making bread.  It just hasn't been working out. I have been making bread for over 10 years and used to sell out at the farmers market.
I decided to start from the very beginning and make one loaf at a time with a simple recipe. By doing that, I think I found out my problem.


I had been letting the dough rise too much on the first rise.
If dough rises too much to begin with, it uses up all the power in the yeast and won't rise later.  I wanted to make a nice big, fluffy, crusty loaf.  So I need to get lots of oven spring.
Once I figured that out, I set to work making a new recipe.  This is what I have come up with so far;
﻿
Posted by Crystal @ Country Mom at Home at 10:54 PM 5 comments:

How We Do Bible in Our Home School

First of all, Happy New Year to all. We have enjoyed a wonderful Christmas and New Year's and now we are getting back into the flow of our routine.
So for lack of nothing else to post about, I thought I would share our Bible program with you.

So, we learn a new character quality every 3 weeks or so.  We learn 2 memory verses to support that particular quality and read bible stories that help illustrate it.  I give Rebekah vocabulary words from the memory verses, that she writes the definitions for as well.  So far we have learned about;  Truthfulness, Self-control, Wisdom, Orderliness, Alertness, Obedience and Resourcefulness.

Right now, we are learning about Hospitality.  Our 2 memory verses are;

"Do not forget to entertain strangers. For by doing so, some have unknowingly entertained angels." Hebrew 13:2

"Be hospitable to one another without grumbling."  1 Peter 4:9

They write each memory verse in a notebook. Which is great copy work. 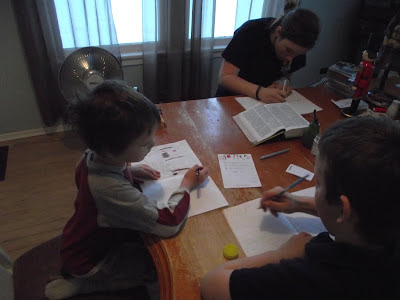 We have the half lined/half blank notebooks, so they colour a picture on the top part and write the character quality.  Which is great for art. 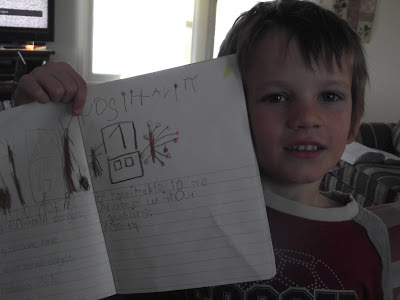 To start bible time each morning, we recite the current memory verse and sometimes have review. Then we open in prayer before reading the chapter of the bible we are on.  Balancing the Sword is a bible study book, that asks questions for each book of the bible. Right now we are reading 2 Samuel.

After we answer the questions, we all say one thing we are thankful to God for and say our prayer requests. We then pray for these things.  Lately, I have been trying to remember to sing a hymn to close our bible time.