Wow! This time of year can be hectic. With the harvest, preserving and school starting. But it is so rewarding to pick what you have grown and preserve it into something yummy that you can enjoy in the months to come. And it is such a joy to see my children learn and be excited about learning.﻿ Well, I have been busy in the kitchen the last week and school has been SLOWLY starting. Here are some of the foods I've been able to put up.

I was only able to can 10 quarts of Dill Pickled Beets this year. Usually I can 49 quarts as I am able to sell quite a few. Oh well, we will enjoy them this year.

My friend traded me some cucumbers for some of my zucchini. So I was able to make 5 pints of Bread and Butter Pickles. My mom always made THE BEST bread and butter pickles and she lost her recipe of course. I tried once a few years ago and they were horrible! So I tried again and they turned out very well.  I also made the most fabulous, simple Apple Juice.  This apple juice tastes just like from the store, with no weird after taste or anything. This is how I made it:

Cut apples in half and fill a big pot. (I used hard, sour, bigger green apples)
Sprinkle 1-2 Tbsp cream of tartar over the apples.
Now fill the pot with boiling water
Put the lid on it and let it sit for 24 hours
Strain juice (I used a colander with a paper towel in it)
Now you can freeze this juice or can it.
I brought the juice to a boil with about 1 cup of sugar
Sterilized my quart jars in the canner for 10 mins
I processed the quarts for 30 mins.

My son is so picky and he loved it. I also thought it tasted very good, although I do not like apple juice.

This is what the apples looked like after they sat in the pot for 24 hours.

I also made fruit leather. I basically made apple sauce, then I added 1/2 a pint of super hard apricot jam I made a few years back. It set way to firm to use, so I use it for cooking with. Then I lined my cookie sheets with parchment paper. I really try not to use parchment paper too much, because it is so expensive here, but I have tried everything else and parchment paper really works the best. Besides, it doesn't take that much to make these. I spread out the apple sauce fairly thick and even. Then I put 2 cookie sheets in the oven at 200 degrees. for about 6 hours. I had to do this a number of times for all the batches. So eventually, I just put them in the oven after I had baked supper, with the oven off. After letting them sit in there for about 2 hours, I turned the oven on to 200 for about 1 hour, then I turned it off again and  let them sit in the oven over night. These ones had such a nice texture. Then I cut them into strips lengthwise and rolled them up and put them in a bag in the fridge.

When I was looking on a link up somewhere, I can across this recipe for homemade pizza sauce from Foy Update. A neighbour had just given me a bunch of tomatoes, so I thought I would try it. We have been using Ragu as pizza sauce and it isn't that good, but cheap. When I was finished canning up 3 pints, there was still about 1/2 a pint left. So, I made a greek pizza with a precooked, homemade pizza crust I had in the freezer. This sauce is really good. It has a fresh taste, not like Ragu. For a greek pizza, I spread the sauce on the crust. Then spread mozzarella cheese all over. On top, I added, thinly sliced onions and green peppers. I baked this until cooked. After it is cooked, I add fresh chopped tomatoes and feta cheese on top. 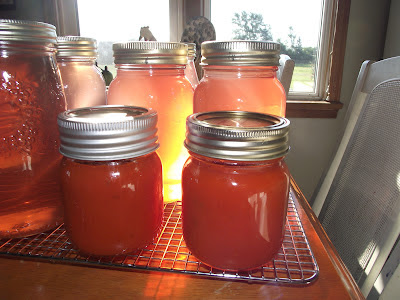 In the background in this picture, you can see the apple juice I made from small red, sweet apples. I used the same technique as mentioned above, but these apples made a different tasting juice. I am going to use it for Hot Apple Cider in the fall and winter. I will pour a quart or 2 (depending on how many friends are over) into my crock pot with some whole cloves and cinnamon sticks. This will be a very nice on our cold winter days.

Well, now I am just waiting for my tomatoes to ripen, which will probably have to happen inside. I estimate that I will have about 40 pounds. And I still need to pick our yellow crooked neck squash. It will be very nice to be done with all of this and just start to enjoy fall, as it seems to have set in around these parts.

God bless you all.

But God demonstrates His own love toward us, in that while we were still sinners, Christ died for us.
Romans 5:8

This post was liked up to Homestead Revival Barn Hop