Since we moved in we have had some other events that I wanted to share.
First, I was sad to leave my pumpkin patch this year as it was the best one I have ever had. And I have to admit, when Larry told me we probably didn't have time to take any pumpkins with us, that was the only time I almost cried during our move. Although there were other stressful and scary times, I knew God was in control and I didn't need to worry. So I would just think in my head. "And yet I will praise thee O Lord".  So when the thought of not having any of the pumpkins I worked SO hard to grow for so long came, yes, I did almost cry. BUT, I didn't. God is good.  When Larry got back from what he was doing and we only had about 1 hour to be off our property, he told me to start loading pumpkins in the trailer. So Rebekah and I loaded, until we couldn't fit any more in it. I had to leave over half of them there, but I was happy I had some.
When we got them to the new house, the question was, "What do we do with them now?" We decided to take them to a local famers' market. Larry had to drive, because they were VERY heavy and he thought I could loose control and flip.  When we got to the market, I got out to ask the lady where to park, and I could see a man was talking to Larry. The lady went somewhere else, so I went over to Larry and he told me the fruit guy from BC wanted to buy all of our pumpkins! And he did, every last one of them. We didn't even have to unload them or pay for a space. While we were in town, looking for big boxes for him to take them in his trailer, he unloaded them and when we got back with a couple of boxes, he paid me and we left.
In the picture below are most of the pumpkins. I did take some out because the trailer was so over weight. 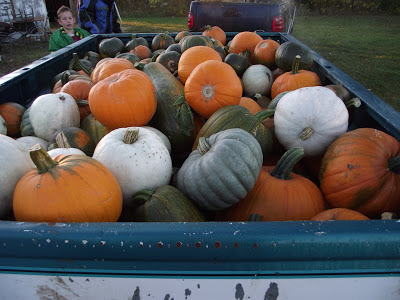 Then, last week, Ben turned 9.  I felt so bad because I hadn't seen a calendar in a couple of weeks and didn't even know what day it was. So, I was able to unpack a few balloons and streamers to decorate with. I made cupcakes too. And I am so happy that Ben is easy to please. He asked for pajamas, a book and a chocolate bar. So I got him pajamas, a few chocolate bars, a children's adventure story book and one of my copies of Farmer Boy. He was very pleased.

On October 10th, we woke up to snow falling. It stayed on the ground for 2 days, then the temperatures got warm again. 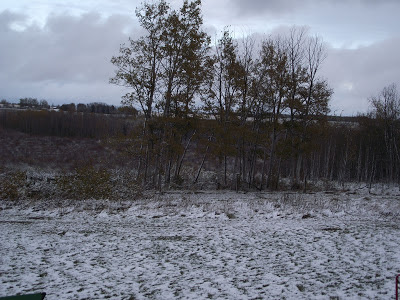 And finally, I was settled enough to make bread again. Larry had been buying bread from the store and a friend had given us a few loaves of her awesome homemade bread, but everyone was thrilled to have bread right out of the oven again. 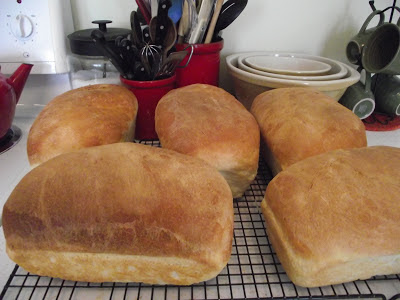 That is what has been going on here, other than unpacking of course.