We had a wonderful new addition to our barnyard today.  Molly finally gave birth to her baby.  I say finally, because Molly was pregnant for 13 1/2 months!  It seemed like the baby was never going to come.
But our joy soon turned turned to worry.  The baby was born with something terribly wrong with it's bottom lip. We just thought it was some kind of birth defect. You can see it in the pictures below. 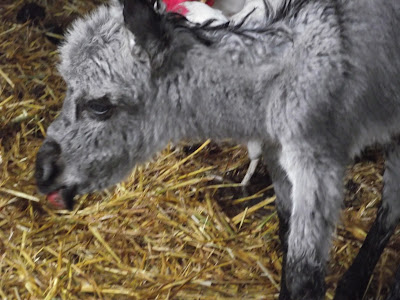 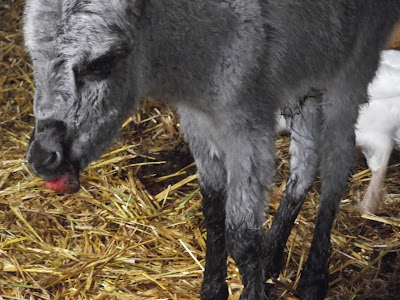 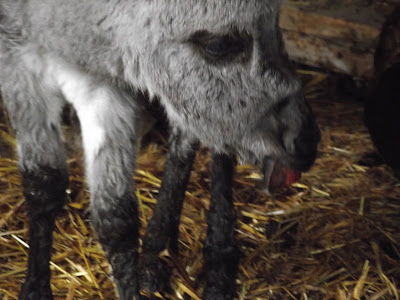 What a beautiful donkey, eh?  We didn't know what to do, but we weren't extremely worried because he was nursing with no problems and Molly was being such a good mama. Remember last year when Molly had Jemima, she wouldn't let her nurse.

I took the pictures of him (we think it's a boy, it's hard to see there just yet) and sent them to a friend of ours that has lots of horses to see if she had any suggestions. If not, we were going to show the vet tomorrow to see what he says.

Our friend, Monica, called us tonight and said she and her husband would like to come over and see the donkey in person.  When they came they had an idea that might help the little guy.  Monica thought it might have been a PROLAPSED lip.  Meaning, some kind of trauma during birth caused the lip to swell up.

She had seen this when cows give birth and prolapse.  She had also seen an old farmer treat this condition by rubbing the prolapsed area with sugar to get the swelling down, then putting the body back in the right places.

So, Monica poured warm water on the lip to get it moist again as it was pretty dry. Then she rubbed a fair amount of sugar on his lip which brought down the swelling almost immediately. Next she gently pushed the lip back up into position and held it there for about 10 mins.

When she let go, the swelling was gone and his lip was staying in place!  His lip is kind of stretched out, so it's pretty loose and it seems his bottom jaw is extended a bit, but we will keep an eye on him, it might get better on it's own. 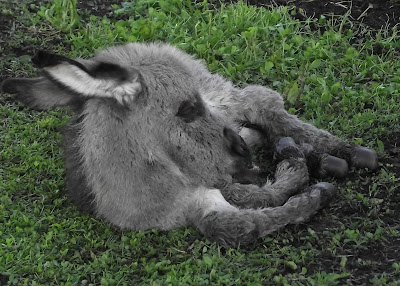 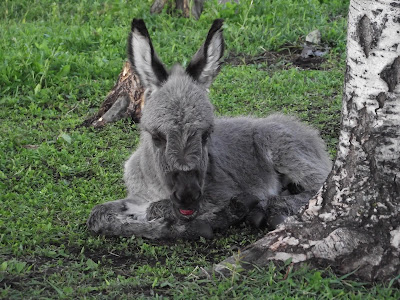 We don't know yet if this was a complete fix for him, but it seems to have really helped.  I am SO grateful to Monica for taking the time to come and for the information she had learned from that old farmer years ago.

And I am thankful to God for helping this little guy, who we have already fallen in love with.

This post is linked up to 1840 Farm, The Prairie Homestead
Posted by Crystal @ Country Mom at Home at 10:55 PM