Late Readers, No Need to Worry 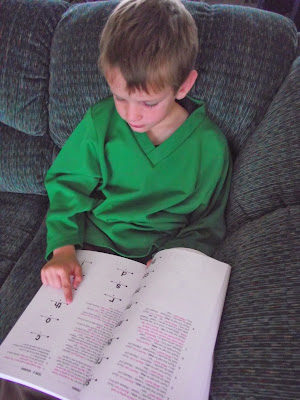 It's been fun posting Christmas crafts the last little while, but now I want to get back to what's really important to me - that is my family and keeping our home.

I really wanted to share the journey we've had teaching Jacob to read.

I taught Rebekah and Ben to read using, Sing, Read, Spell and it worked great for them.  So, 2 years ago, I set out with the same plan for Jacob. The only thing was, he really wasn't getting it.  I kept it up for a few months with no success at all. So I thought I would try something else.

That's when we started using, "Teach Your Child to Read in 100 Easy Lessons".  This too was not seeming to be able to teach him. At that point I took a few month break from trying. I remembered what Raymond Moore said in his book, "Better Late Than Early".  He said that some kids just aren't ready to learn to read until they're closer to 9 years old and to push them before that would do more harm than good.  If you wait until just the right time, they will learn very easily.

Not wanting to miss "just the right time", I would try every few weeks to see if he might start catching on.  So we went back to, Sing, Read, Spell".  Still nothing. Another break. Try again. Nothing. Another Break and so on.

So now just 2 years after we started this journey, I went back to "Teach Your Child to Read in 100 Easy Lessons".  This  time Jacob seems to be getting it. He can actually sound out the words. Such as; rock, meet, ram, this, eat....  But, he will read a word and then just 2 words later come across the same word and not recognize it at all. I'm thinking he might not be entirely ready, but I can see the hope that he WILL get it.

I used to call Jacob a struggling reader, but I don't think that's right. Just because he didn't get it right away like his brother and sister, doesn't mean he's struggling.  He is just a late reader. He will get it and I don't want to push him.  I love that about homeschooling. He might have been over looked at a public school, or made fun of because his brain isn't quite ready to learn to read.

I think we're ready for another break. Maybe until after Christmas.  So, I'm just saying, all kids learn at different speeds and it can be frustrating to have such differences in our children, but in the end it will all work out:)

This post is linked up to; Raising Arrows Hope in Every Season Learning Table Raising Homemakers A Mama's Story